A technology ignored by the powerful – why? 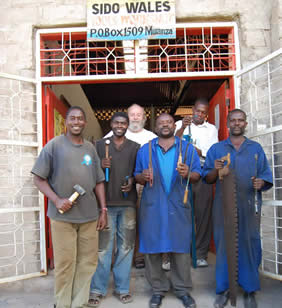 Glyn Roberts
Founder of Tools for Self Reliance

Something puzzles me, something about people using tools. This is a very human activity and nearly always a good one. But if the idea of tools in use is that good, why doesn’t the Tools for Self Reliance message spread like wildfire around the world, in North and South alike?

I’d like here* to explore the value of hand tools in a world under threat; then query why people in high places ignore the potential of such tools; and lastly suggest what we might do to change things.

Tools have been part of our lives for thousands of years, and I believe they will be at work long into the future. I recently saw a plane from ancient Rome, two thousand years old. It was cast in bronze and decorated with the head of Jupiter, but it was essentially the same plane as you would find in any carpenter’s workshop today And just such a plane will be used a hundred years from now, when a 2003 state of the art computer is laughably out of date.

Why are hand tools so special? Because they are ‘almost human’, they focus creative power, turning materials into products of use or beauty. I has been said that ‘a tool is an extension of the human body’ and the quality of craftsmanship does flow from the working man or woman into the object itself.

One definition of humanity is that we are “tool-using animals”, and I would go so far as to say that tools are fundamental for any truly human society.

Over the years, as we know, technologies have become increasingly sophisticated and seem almost to have developed a momentum of their own. The car, the factory, the plane, biotechnology, nuclear power… they affect each one of us, they impact on society and on the natural world.

They generate huge amounts of goods and services, and by and large they also consume vast quantities of natural resources, they make millions of people redundant and they cause profound environmental damage. At first sight they offer affluence and comfort, but they may end up costing the earth.

The United Nations Earth Summit Conferences in Rio and Johannesburg spent days discussing the oceans and the forests, but said much less about poverty in the Third World. They approved the principle of ‘sustainable development’, but had nothing practical to offer the millions of young people in Africa today who hunger for jobs, security and a useful role in society.

Of course we must protect the environment, and we cannot be blindly ‘against’ progress and new technologies, but it is worth remembering that:

All modern technology depends ultimately on basic hand tools. Despite its sophistication, the most advanced machine, telescope, space shuttle – you name it – will develop faults and break down without the back-up of humble spanners, screwdrivers, or soldering irons in the hands of skilled working people. Most men and women on this planet still grow their food, earn their living, build their homes, mend their clothes – using only basic hand tools – digging hoes, saws, trowels, sewing machines and the like. These two facts are usually ignored by economists and development planners – people who have the power to make crucial decisions when choosing between technologies, in order to ‘promote development’.

Let me recap. Tools may seem old fashioned, but in fact they are highly productive, amazingly versatile; they cause very little damage, pollution or waste; they are truly cost-effective and they generate employment. Has any other technology such a catalogue of good qualities? The UN Earth Summits should have chosen as their symbol for sustainable development – a box of tools!

Tools ignored by the powerful

Hundreds of millions of people in Africa, Asia and Latin America have no job. They want to work, to earn a living, to give their lives purpose and content. That so many are unemployed is a waste of human talent and a personal tragedy for each individual. It also underlies much social unrest. Fortunately, development theory now supports the idea of popular participation. “If the People are not fully involved,” we are told, “development isn’t true development” Fine. But who can work with bare hands?

Some years ago I was at a UN conference in Tanzania, with delegates from all over Africa. The theme was Popular Participation in the Recovery and Development Process in Africa. President Mwinyi of Tanzania opened the event with these words: “Our major resource is our people!” The conference went on to recommend “collective self-reliance”, “empowerment of the people”, “small scale indigenous businesses”, “recognising women’s roles as producers” “and “employment opportunities for the rural and urban poor”. Excellent!

Towards the end of the conference, which urged Africa to “increase the output and productivity of the masses”, the Chairman gave me an opportunity to speak and I asked quite simply, “If the continent is to recover, with all the people participating in productive work, it will need hundreds of millions of tools. Where are they to come from? And without tools, how are all these goals to be achieved?” Answer there was none, and the Conference final report – full of grand principles and sociological jargon – made no mention of the matter.

Officials, academics, administrators – their thoughts are on higher things than common hand tools.

Recently, too, I visited the Director of a major British aid agency. Arriving a little early, I passed the time leafing through the agency’s Handbook for Fieldworkers. Five hundred pages thick, it explained how to assess overseas projects in health, education, farming, water, small businesses and the like. I skipped some parts, but looked carefully at the sections on small businesses and income generation. There was no mention of tools for artisans. Why? However the Introduction did contain the phrase, “We hope this Handbook will prove a useful tool for staff on overseas projects”

At a seminar in London a little while ago, the UK department for overseas development told us that Southern governments and their advisers “very rarely” mention the need for tools for working people. Why?

Perhaps it’s because administrators in both South and North think in terms of projects, with huge budgets and nice neat edges. Projects that can be videoed /written up / accounted for. The idea that millions of ordinary people need tools, not for Projects, but for getting on with their daily lives at village level – this seems to be too difficult a concept for aid agencies to grasp.

Some years ago, an annual general meeting of Tools for Self Reliance (TFSR) approved a motion that urged rich countries ” to set aside development funds for alleviating the lack of tools in the poorest countries… and to initiate a Fund of £0.01 per head of population for the local production and supply of tools to the most needy.”

TFSR wrote to the British aid department (Overseas Development Administration) and got this reply: “Wide distribution of hand tools is not sound development policy and is liable to distort and damage manufacturing sectors… At present the ODA can only justify such action in the case of post-disaster assistance, preferring the local production of such tools in all other cases.”

TFSR wrote back to ask just which manufacturing sectors had been damaged by the provision of tools, but we also welcomed the ODA’s readiness to support local production. After all, this was our policy too. We asked for details of government schemes supporting tool production in the South and what plans there were for the future. The reply, after some months, said the ODA had “nothing more to add.”

Why the disdain for tools?

Why do those in power spend millions on experts, buildings, computer systems, vehicles and other high-energy technology (frequently out of action within months in the tropics) when tools, at a fraction of the cost, could generate so much more real development on a human scale?

There’s no denying that advanced technology can be both productive and seductive. Air- conditioned Range Rovers, powerful computers, gigantic earth-shifting machinery – all promise exciting power at the touch of a button. The promise may be exaggerated or false, but people want to believe it.
The new technologies have vested interests pushing them. Companies and governmental advisers in Europe, North America and the North in general offer Southern countries technical fixes for their problems, often using bribes to facilitate the sales – then claw back millions of dollars, plunging the poorer countries further into debt. There are very few perks to be had from selling hand tools to artisans.

Most administrators and executives – who make the key decisions – are not practical men/women. Their privileged world is one of conferences, jet travel, hotels, papers, electronic gadgetry… and they have forgotten – if they ever knew * what it means to earn a living with their hands. “If a roof leaks or my car breaks down,” they say, “a little man simply comes and fixes it.”
Most don’t actually give two hoots about “people’s participation in development”, certainly not as a driving force for a fairer world society. They reason that progress needs capital, and capital needs profits. Profits come from the global economy, a modernised sector, new technology and reduced labour costs. So the people of the South are scarcely relevant, either as producers or as consumers… just so long as they don’t get any crazy notions of becoming terrorists.

Some time ago I was at a North/South conference in Berlin. I tried to get the tools message across. In one session, several people from the North laughed out loud at the very idea of equipping Southern artisans with hand tools and I was disappointed that participants from the South sat silent. Yet later, in the corridors, various Southern delegates came up to me – separately, almost embarrassed – saying, “I was quite interested by your idea. Actually, my organisation has a big problem getting basic tools. How do we contact Tools for Self Reliance? ” My response was that, while we would like to help everyone with their needs, trying to meet individual requests piecemeal will never match up to the scale of the problem. The only answer is to move “tools” from being a private problem to a public issue. We must speak out.

I do not believe that a continent can ever develop until it has a widespread artisanal sector, in every town and village, providing jobs and local goods and services. This will never happen in Africa unless people at all levels – artisans, educators, aid agencies, politicians – start to make tools a public issue.

Of course the continent’s problems are complex, both internally and externally, and youth unemployment is only part of the picture. I am not saying that tools provide a magic and instant solution; but I am saying that any realistic strategy for youth employment and development in Africa will have to include tools for the whole people.

* Address to the Conference on “Youth Unemployment, Partnership, and the Importance of Tools for Development”,

How you can help